Published: 30 May 2016 г.
The University of Central Asia (UCA) Board Executive Committee Executive Chairman and Aga Khan Development Network (AKDN) Diplomatic Representative to the Kyrgyz Republic Shamsh Kassim-Lakha delivered a talk Creating Opportunity on the Roof of the World. He spoke in London on 20 May 2016 as part of the Aga Khan Foundation United Kingdom’s (AKF UK) Breaking the Cycle of Poverty lecture series. 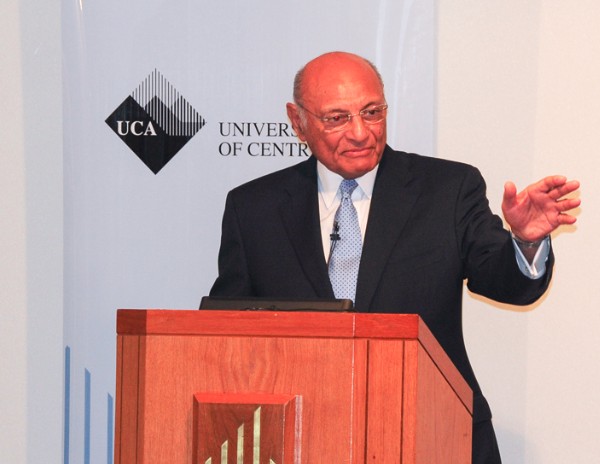 Click here to watch the Webcast Recording of Kassim-Lakha's Creating Opportunity on the Roof of the World lecture
The University, founded by in 2000 by the Presidents of Tajikistan, the Kyrgyz Republic, Kazakhstan and His Highness the Aga Khan, will welcome the inaugural class of undergraduates to Naryn, Kyrgyz Republic in September 2016. UCA is building three campuses of equal facility and standards in Naryn (2016), Khorog, Tajikistan (2017), and Tekeli, Kazakhstan (anticipated 2019).
His Excellency Robin Ord-Smith, British Ambassador to the Kyrgyz Republic and past Ambassador to the Republic of Tajikistan, delivered the opening remarks. Ambassador Ord-Smith, visited the Naryn Campus in February 2016 and recently participated in the British Embassy-supported UCA Institute of Public Policy and Administration (IPPA) forum on Mining Policy in the Kyrgyz jointly organised by UCA and the Kyrgyz Ministry of Economy. He praised the University, calling it “a great vision; and an extraordinary and important project” that the region needs. 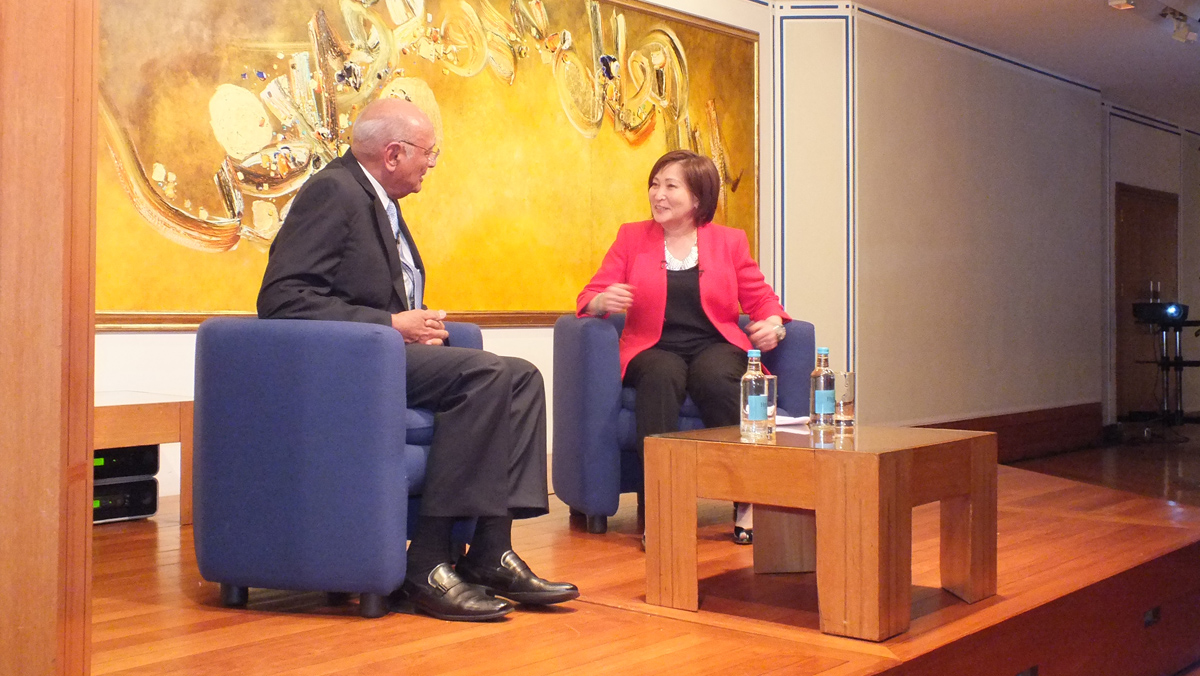 Kassim-Lakha addressed the diverse audience, which included representatives from government, the diplomatic corps, media, the donor community, the Ismaili community and the wider public, emphasising the strategic importance of the Central Asian region in a globalised world.
“There is an inverse ratio between the height of the mountain and the economic status of those who inhabit it; the higher the mountain, the lower the economic status. There is resilience and initiative within mountain communities,” said Kassim-Lakha. “Education bridges the divide. We want to give communities the opportunity to reverse this risk of marginalisation through higher education.”
The University is pursuing applied research through its Mountain Societies Research Institute (MSRI), IPPA and the Cultural Heritage and Humanities Unit (CHHU). UCA’s Aga Khan Humanities Project (AKHP) partners with state universities in the region, providing an innovative humanities curriculum that promotes civic awareness, liberal arts and analytical writing.
“Research is very important. We need to create knowledge in order to develop job creators. We need to find opportunities, and that comes out of the intellectual application of minds, creating research and fostering socio-economic development of Central Asia’s mountain based societies, and helping societies preserve and draw upon their rich cultural heritage,” said Kassim-Lakhka. 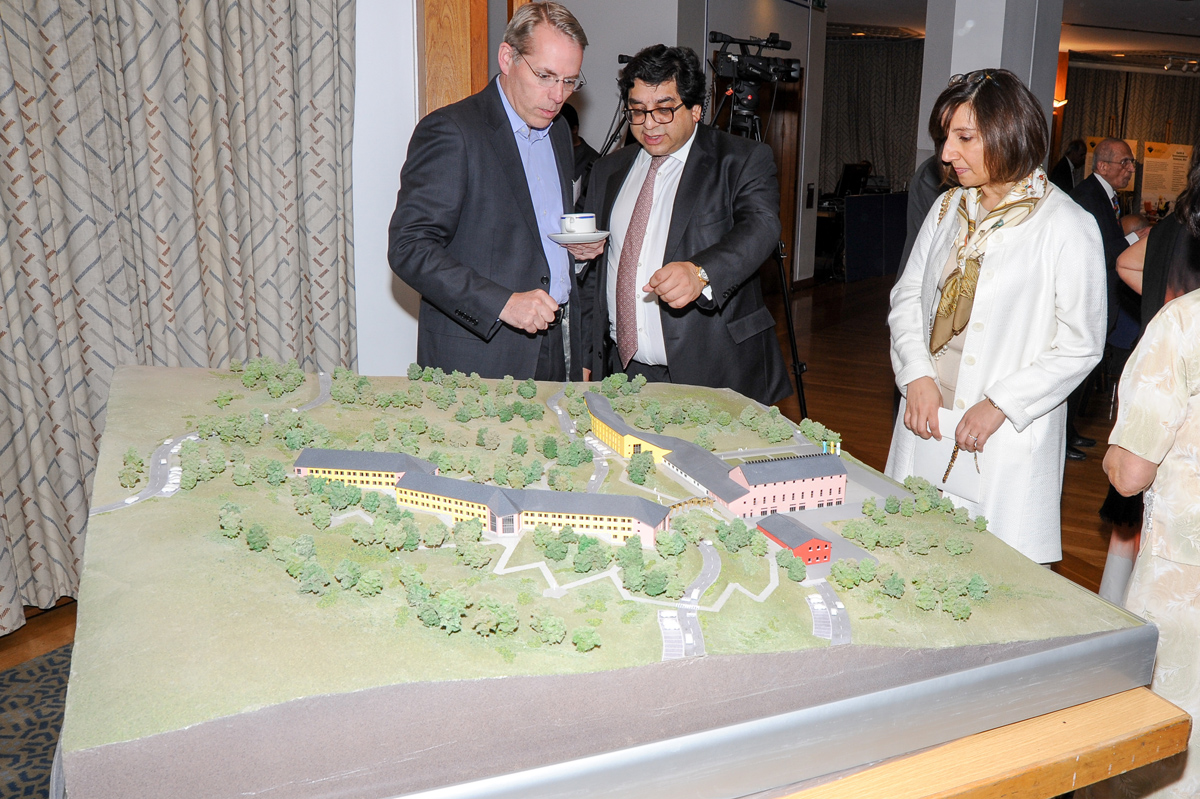 Kassim-Lakha also related the School of Professional and Continuing Education’s (SPCE) long-standing contribution to the region by providing training to more than 85,000 learners at 12 locations in Central Asia and Afghanistan. More than half of the learners are under 25 and nearly 70 percent have been women.
After Kassim-Lakha’s talk, Senior Producer for British Broadcasting Corporation (BBC) Kyrgyz Television, Radio and Online, Gulnara Kasmambetova, led an open discussion and question and answer session. She noted that UCA will offer an undergraduate degree programme in Communications and Media and praised UCA’s decision to educate students in English. A BBC news documentary, produced after an earlier visit to the Naryn campus by Kasmambetova, was premiered to the UK audience.

Responding to a question from Almaz, a member of the audience from Naryn on the decision to also offer undergraduate specialisations in Computer Science, Kassim-Lakha explained the need to expand opportunities in the industries of the future.
“We have to bring opportunities to the mountains. We have to ensure modern technologies, modern means of communications in the best form are brought to mountain communities,” explained Kassim-Lakha, noting that the Nielsen company conducted an in-depth market survey to determine where future jobs lie and what the future of Central Asian economic development entails. He noted that UCA’s Computer Science programme received the largest number of applicants during its recently completed admissions campaign.
UCA will offer integrative undergraduate degree programmes in Computer Science, Communications and Media in Naryn and Economics and Earth and Environmental Science at the Khorog campus. The Tekeli, Kazakhstan campus will offer Engineering Sciences and Business and Management.
The University is estimated to generate more than $750 million in projected economic impact of the region, including more than 1,000 construction jobs and 300 new faculty and staff positions.
UCA undergraduate education is delivered in English and rooted in a liberal arts approach to encourage graduates to be globally competitive. Admission to UCA is merit-based and the University offers generous financial aid; no student will be denied admission based on need.
The UK’s Department for International Development (DFID) has provided support to UCA’s research agenda through funding to MSRI. Through its Central Asia Faculty Development Programme (CAFDP), eleven of 35 Central Asians are pursuing their doctoral study at UK institutions such as Exeter and Cambridge Universities.
The Breaking the Cycle of Poverty lecture was organised by AKF UK along with The Ismaili National Council and UCA at the Ismaili Centre, London.